1. Take a Fat Tyre bike tour. An awesome introduction to this great city.

2. Walk around the area near Checkpoint Charlie, reading the inscriptions where the wall used to stand.

3. Get lost and reflect in the maze created by the inspiring ‘Memorial for the Murder of the Jewish‘

4. Wander around the front of the Red Rathaus, Berlin’s town hall with Neptune’s fountain out the front. 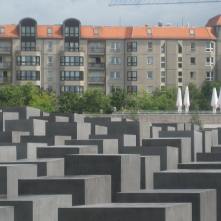 3. Memorial for the murder of the Jewish 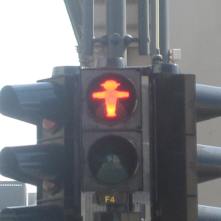 6. Walk through the majestic Brandenburg Tor, which is so much more easy to say in English as Brandenburg Gate. Brace the crowds at this popular meeting place. Imagine a baby being dangled from a balcony by a beloved king of pop.

7. Go on a hunt for remains of the wall, which turn up in all sorts of unusual places, even in a nightclub set outside in a sand pit where you will see John Cusack. Yes really.

8. Check out the remains of the Kaiser-Wilhelm Gedachtnis Church, in the Nikolai Quarters, bombed during the war.

9. Head out to Schloss Charlottenburg for a day trip to see the 17th century palace with gardens created by the same designer as Versailles.